Maybe it's just me, but the long, cold months of this past offseason seemed longer and colder than in years past. Rogers Hornsby once famously answered the question about what he does in the off season with "I stare out the window and wait for spring". Well, with apologies to Mr. Hornsby, we've come a long way since then. Now we have Internet equipped computer screens to stare into while we anxiously await the day we all circle on our calendars (or enter in our smartphones) the second the season ends: pitchers and catchers report. Despite the technological advances, the news worthy tidbits that trickle out during the offseason are still few and far between, especially for a fan base so recently re-energized by The Trade with the Marlins. So we, as fans, must amuse ourselves from time to time with games of our own making.

The two most common this offseason were "Set The Starting Rotation" (we all lost, unless you called Chien Ming Wang, in which case AA would like to offer you a job) and "Name The Second Baseman", and it's the second of these I'd like to re-visit now that we have some data from this season to go off of, and because it's about to be relevant with Reyes' seemingly imminent return. Also, there is a new contender for the role that was on quite literally nobody's radar in the offseason. At that time, it was basically between Izturis and Bonifacio, but since being called up to fill in during Reyes' absence, Munenori Kawasaki has slapped, bunted, bowed and danced his way into our hearts, filling the void left years ago by John McDonald as the batless bench player that we can't help but love. Now there is a sense of anxiety among some fans the Blue Jays' mascot/spirit animal will be back riding buses in AAA once Reyes comes back or, if not then, when Lawrie returns from his latest boo boo.

So far this season, injuries have rendered the offseason deliberations of armchair managers everywhere moot, with all of these players forced into near every day duty to fill the gaping holes in the infield. Obviously more injuries could always crop up, but assuming Reyes and Lawrie are back fairly soon and nobody else goes down who should we expect to see as the every day second baseman from here on out? Who should we hope to see as the every day second baseman? Are the guy we should hope to see and the guy we should expect to see the same guy? I would hope so! Confused yet? Good. Let's check it out. 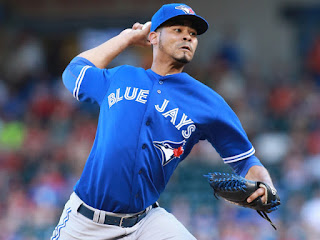 I don't know what your feelings were when, back in November, the Blue Jays traded utility infielders Mike Aviles and Yan Gomes to the Cleveland Indians for right handed relief pitcher Esmil Rogers, but mine could probably best be described as optimistically indifferent.  I found it pretty hard to get too worked up about the trade one way or another.  At the time, it fit in with an apparent organizational focus on acquiring big armed relievers, and was notable only because it fit that trend.  The players sent to Cleveland were really just bit parts.  Yan Gomes had been a bit of fun in 2012, but was pretty terrible overall.  Mike Aviles was, infamously, the piece that came back from Boston in the John Farrell trade and had been tentatively penciled in at second base by fans since at the time there weren't really any other options.  To some it seemed curious that the Jays would trade their only second base option (Izturis hadn't been signed yet, but would be about a week later) for yet another hard throwing reliever.  While it was a little odd, we were still talking about utility infielders and low leverage relievers so there were only so many cares I could be bothered to give.

Now, I keep referring to Rogers as a relief pitcher, but that wasn't always the case.  The Rockies had used him as a starter in 2010 and 2011, giving him a combined 21 starts over that time, but the results were, well... pretty terrible.  He made 13 of those starts in 2011, posting an ugly 6.66 ERA, although playing in Colorado was likely something of a factor as his xFIP was a better but still not great 4.91.  His biggest problem was his control.  That year as a starter he walked 11% of the batters he faced, or 4.77 per nine innings.  Home runs were also a problem (but when aren't they in Colorado?) as he was giving them up at a rate of 1.63 per nine innings.

In 2012, however, he pitched exclusively as a reliever and had significantly better results.  After a  mediocre start to the season with Colorado, he was traded to Cleveland in June and became a whole new guy.  Both his walk and home run rates got under control, and he pitched to a second half ERA of 3.40 and FIP of 2.84.  Given his poor results as a starter, and his relative success in relief, nobody would have been surprised if the book on Rogers' starting career had been closed.  The Blue Jays certainly seemed determined to keep him as a reliever, opting to give starts to a revolving door of nobodies before Rogers got his shot May 29th against Atlanta, and did well enough to earn himself two more starts since.  What should we expect from him going forward?

Things to STFU About: Bautista, McGowan, and Bautista (Among Others)Again

So I could have sworn it was just a good old fashioned rainy day out there in Toronto, with nothing but harmless rain water falling from the skies. Imagine my shock when it turned out to be a full blown stupidity storm, with pure, unadulterated idiocy cascading down upon us and infiltrating the discourse surrounding our beloved Toronto Blue Jays. Now that I've dried off a little, I feel up to being your umbrella, protecting you from getting drenched by dimwittedness, soaked by stupidity, or inundated by ill-formed ideas. Let's get started!

I mean seriously, has a dumber hash tag ever existed anywhere outside of Brett Lawrie's Twitter feed? Seriously, think about that. "Let's punish our best player for taking himself out of a game by taking him out of a game!". Ugh.  No matter how small but vocal the #BenchBautista movement has been, it needs to stop now. It's not going to happen, nor should it.

After two months of watching the offensive black hole that is Henry Blanco (.184/.262/.263) getting run out there as Dickey's personal catcher every fifth day, proponents of the #FreeThole movement have finally got their wish. He makes his debut today against the Rangers after being recalled on Friday.  It's almost a certainty that he will take over the duty of catching Dickey, and as a replacement for Blanco in that role he can't help but be an improvement.  Thole sports a career .260/.330/.332 line so he should be an offensive upgrade, and he caught Dickey's Cy Young season so he should be capable behind the dish as well.  What will this mean for Arencibia though?  Could his playing time be in jeopardy? Let's hope so!

Who Are You and What Have You Done With Adam Lind?


I've always been torn when it comes to my belief in the existence of extraterrestrial life forms.  I find it hard to believe that in the infinite vastness of the universe intelligent life doesn't exist somewhere.  However, most reports of human contact with aliens are somewhat less than credible and, having never had such an experience myself I've found it hard to fully commit to belief.  I guess I think it's probable that they exist, but am skeptical that they have visited Earth.  Or at least I used to be...

I watched Men In Black II last night, and have now spent the afternoon watching Adam Lind collect 4 hits and a walk against Yu Darvish and the Rangers, and I think I have finally been convinced that aliens do indeed exist.  I have concluded that, much like in Men In Black, the Adam Lind-like life form we have been observing for the first 2 months of the 2013 season is no longer the Adam Lind we all would have gladly fired into deep space these past three seasons.  Rather, it is an extraterrestrial visitor that has taken human form, impersonating Adam Lind in order to live and work among us.  It's a clever plan really.  You can hide in plain sight, and if you're an alien visitor to Earth you can do worse than the lifestyle of a Major League ballplayer.  The likeness is quite believable, and its plan might have even worked if not for a fatal flaw in the disguise.  It can't be Adam Lind, because Adam Lind sucks, and this alien impostor is absolutely raking.

The only other possible explanation is that Lind has completely overhauled his approach at the plate, becoming more selective on pitches both inside and outside the zone and showing a willingness to take a walk that has been completely absent for the previous three seasons.

I'll leave it up to you to determine which is the more likely scenario.  In the meantime, let's examine the evidence shall we?

On Melky Cabrera and Double Jeopardy 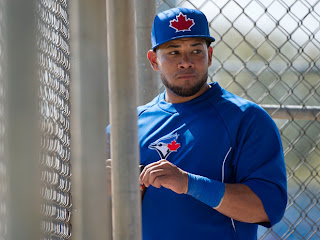 In case you happen to be the person out there that hasn't heard, BioGenesis, its shady founder Tony Bosch, and his stable of famous (and not so famous) "clients" are back in the news this week following reports that MLB intends to go hard after those linked to PEDs in previously uncovered documents. I don't intend to get into all the specifics here, so I encourage you to read the linked article above for the back story.  You know... in case the rock you live under lacks cable television or an internet connection (in which case I guess you wouldn't be here, but I digress).

The list is headlined by superstars Alex Rodriguez and Ryan Braun, but also includes a number of other players ranging from familiar names to fringe major leaguers to players that have yet to play a single game in the bigs.  I also don't intend to wade into the fray that is MLB's PED policy.  It's been done to death and I'm sure there will be no shortage of opportunities to do so in the near future.  I would like to focus on the Blue Jays' connection in this case.  Also named on the list is our shiny new left fielder Melky Cabrera who (and I'm talking to the rock dwelling among you again) served a 50 game suspension last season for testing positive for elevated levels of testosterone.