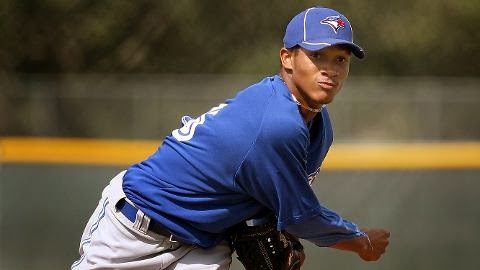 The fine folks over at Baseball Prospectus released their list of the top 101 prospects in baseball yesterday, and for all the talk of the Blue Jays' decimated farm system (albeit mostly among the uninformed, irrationally negative set) they do fairly well. Three Jays cracked this year's list. Two of them will be no surprise, but the third is a new name that many fans will no doubt start paying more attention to due to his inclusion on lists like these.

I'm sure you've already guessed the first two nominees, Marcus Stroman and Aaron Sanchez, but right-hander Alberto Tirado has been getting more and more buzz this year, and made it onto the BP list at #76. He's still a long way off, and a lot could happen between now and us ever seeing him in the bigs, but if you follow the excellent work of Jason Parks at all his presence on the list shouldn't be a shock. The Professor is very high on the young Dominican and has been singing his praises for months now.

Without lifting too much pay-walled material (go get a BP subscription!), let's take a closer look at the trio of Jays prospects and BP's scouting reports on them.