What's Goin' On With Goins? 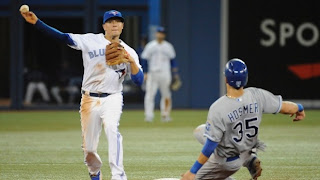 Whenever a young player gets his first call to the show, there a thousand and one clichés thrown around about "making the most of the opportunity". If you could bring the clichés to life, you may very well end up with Ryan Goins, the Buffalo Bisons shortstop turned Toronto Blue Jays starting second baseman. Since being called up on August 22nd, he's been on a tear both offensively and defensively, winning the hearts and minds of Jays fans everywhere. Dare I say it, he's even made a number of them reconsider their daydreams of watching beloved mascot Munenori Kawasaki every day in 2014. In other words, he's been making the most of it.

He was always on the outskirts of discussions on the Blue Jays' top prospects, so there's a very good chance that the first time a lot of fans heard his name was when he was called up from the Bisons a week ago. So where did this Goins kid come from? With the black hole at second base all year, why is this the first we're even hearing of him? Most importantly, with as good as he's looked, could he be the answer to the second base question in 2014? 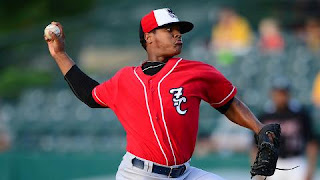 Recent circumstances have led to a greater focus on the next wave of Toronto Blue Jays pitching. The fact that the 2013 Jays are pretty much a lost cause, the perhaps unsurprising news that Brandon Morrow's season is over, and Josh Johnson's placement on the DL with a forearm strain have led to speculation around which new faces we might see in the Blue Jays' rotation in September if not sooner, as well as what the rotation might look like in 2014.

Currently pitching in AAA are Kyle Drabek and Drew Hutchison, familiar characters that haven't been seen in a while due to their recoveries from Tommy John surgery. By all accounts they're progressing well in their Minor League rehab assignments, though Kyle Drabek seems to be having much better results in the small sample. He's only walked 6 batters in 39 rehab innings, which isn't enough to say the control problems that have plagued him are a thing of the past, but is still nice to see.

Sean Nolin is another pitching prospect, recently promoted to AAA Buffalo, that could get another look by the Blue Jays before the end of the season. Fans probably best remember him for getting absolutely shelled in his Major League debut. In 1.1 innings pitched, he faced 11 batters giving up seven hits, walking one and striking out none. It was ugly. However, prior to his promotion to AAA, he lead AA by FIP at 2.69 and was striking out 26.8% of the batters he faced. So far the left hander he's only allowed 2 runs in his first two AAA starts, so it still appears that there's a lot there to like. I wouldn't be the least bit surprised to see him get another shot with the Jays this year.

The prospect I find most interesting, however, is 2012 first round pick Marcus Stroman. Not necessarily because I think he'll be the one to get the call, or that he'll be the best of the bunch, but because the consensus among people far more knowledgeable than I is that the stocky right hander could be an impact reliever in the Major Leagues tomorrow. In fact, most assessments of him tend to lean towards him ending up as a late innings reliever eventually, and there is a school of thought, admittedly mostly among disgruntled fans anxious for the Jays' once vaunted farm system to yield Major League dividends, that the Jays are just wasting time and risking injury while experimenting with Stroman as a starter.

John Gibbons and the Myth of the Magical Manager

We've all heard it recently. "They need to fire Gibbons and bring in a proven winner!" they exclaim, usually before naming a bunch of old-school, bunt loving, never-coming-to-Toronto-anyways dinosaurs to replace him. Sometimes it's preceded by an "I know the injuries and poor pitching aren't his fault but...", but inevitably most of the commentary on the Blue Jays' new old manager reaches the same conclusion: he's got to go.

Just in the last couple of days, we've seen plenty of debate in the Blue Jays media regarding Gibbons' role in the debacle that has been the 2013 season. On their main sports page, the Toronto Star currently has no less than 5 articles touching on Gibbons' future, or lack thereof, with the team as we begin looking towards 2014. At the Star, the Gibbons articles range from Cathal Kelly's defense of the skipper to Damien Cox's steaming pile of poorly thought out word vomit calling for another man to lose his job for no other reason than Anthopoulos and Beeston needing to "stop being nice guys and deliver a winning ball club". Sportsnet's Dirk Hayhurst falls somewhere in the middle, twisting himself into knots to make it clear that he doesn't blame Gibbons for 2013's epic disappointment, but that he needs to go anyways.

Now I'm not hitching my wagon to Gibbons to the exclusion of all other candidates. I can acknowledge that there are probably plenty of other managers that can do the job as well or better, just as I'm very certain there a lot more managers that would do a much worse job. Should the Blue Jays decide to give him the axe I would feel it was uncalled for, but I wouldn't shed tears. I sure would roll my eyes and shake my head though. At least if they were to do it this off-season. 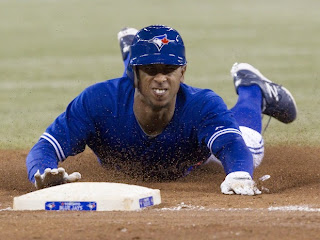 There's a lot of talk about Anthony Gose these last couple of days, and with good reason. While he's expected to get a call up as soon as today after the Bonifacio trade, it's notable that Pillar got the first call when Colby Rasmus went on the DL yesterday. This essentially signals that Gose has, for the time being at least, been passed on the depth chart by Kevin Pillar. The same Kevin Pillar that was drafted in the 32nd round and considered pretty much a non-prospect as recently as this past off-season.

In my own little baseball social media universe, the Gose chatter sort of reached an interesting point last night in a brief Twitter debate primarily between Andrew Stoeten of Drunk Jays Fans and Mike Wilner of Sportsnet and the FAN590. Here are the highlights from the heavyweights:


Before we start, I would just like to acknowledge that I too hate myself for that title. Let's just move past it together, just as together we will move on from the Emilio Bonifacio era in Toronto.

That's right Jays fans, those of you clamouring for Anthopoulos to "trade Bonifacio for a bag of balls" have got your wish. Earlier today, Bonifacio was shipped to Kansas City for, well, pretty much a bag of balls. Cash or a player to be named later will be coming back the Jays' way, so this is pretty much a move for a roster spot and a little something of something, which is totally fine under the circumstances.

After Bonifacio beat out an infield chopper in Monday afternoon's game against Oakland, I summed up my feelings on Bonifacio thusly:

Man... Bonifacio would be a lot of fun to watch if he were even just a little bit less terrible. #BlueJays #Jays #Athletics
— Blue Jays Blackboard (@BJaysBlackboard) August 12, 2013