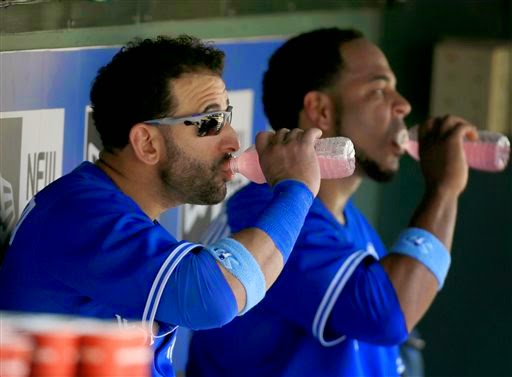 So it's been a while, eh? To anyone that cares enough to check in regularly (hi Mom!), my apologies for the longer than usual layoff. The frantic conclusion of a school year leaves little time to spend hours writing about such inconsequential things as your FIRST PLACE TORONTO BLUE JAYS! At least that's what the principal keeps telling me. Besides, as exciting as all that winning was, it's much easier to find things to write about when things are going poorly than when they are going so well. Now that things aren't looking quite so rosy, I feel the need to wade back into the fray. I'm not sure what that says about me. I'll let you decide.

You see, I've been noticing some near-hysteria creeping back into the discourse around the team, and I think a little bit of perspective might do a few folks some good right about now. All the usual disclaimers about it still being early apply, and yes the Jays have done a fine job of squandering a chunk of the lead on the division that they held a few weeks ago, but they still sit in a far better position than anyone had a right to expect before the season.

Let's get the bad news out of the way first. It seems to be all anyone wants to talk about, besides mostly ludicrous trade scenarios at least. Since running roughshod over baseball for a month or so, the Jays came back to the pack rather quickly with a disappointing few weeks. Their winning percentage peaked on June 6th at .613, but since then they have gone 6-12 for a winning percentage of just .333. There have been cases of regression and a couple of injury scares along the way, but the way some fans and media folk seem ready to press the panic button and are begging for some sort of farm system depleting, win now trade deadline move that is like... totally, super seriously, 100% critical for the Blue Jays to remain competitive strikes me as just a little bit premature.