Anthopoulos Has His Work Cut Out for 2014

Tom Maloney at the Globe and Mail wrote a very interesting and enlightening article yesterday, in which he takes a very business oriented look at the challenges facing the Blue Jays this off-season (hat tip to @TaoofStieb for linking it). Upon reading the piece, I got into a bit of a Twitter discussion with @Stivbators and @ericviola_ about just what implications it might have for the team in 2014.

There's a lot of comfort that can be taken from the article, as Rogers Media president Keith Pelley is quoted as saying a lot of the right things about being committed to the Blue Jays as an investment in content for their various media platforms. This makes a lot of sense, as in the age of PVRs and cable cutters, live sports is one of the few types of content that still makes for reliable appointment viewing and the advertising revenue that goes along with it. Pelley and Rogers have obviously come around to the realization that a winning ball club is a much better investment than a losing one, and that has been reflected in the massive jump in payroll last off-season.

What I found less comforting, and the nugget which was the center of our little Twitter round table, was the line from Maloney that reads "observers expect the Jays to seek ownership’s approval on a payroll increase of $20-million to $25-million – up from about $127.8-million (U.S.) this year – without raising ticket prices." That sounds like a lot of money (okay it's a ton of money, but we're talking in baseball terms here), but we were all curious exactly how much flexibility that would leave Anthopoulos to make the kinds of upgrades that will be necessary for the team to reverse its fortunes in 2014.

My calculations were less than encouraging.

The Mystery of Melky Cabrera Solved: Has Benign Tumour Removed 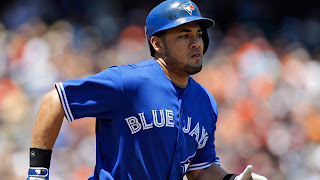 Unexpected news in Blue Jays land today as it was announced that left fielder Melky Cabrera has had a benign tumour removed from his spine. According to the story at Sportsnet Cabrera, in addition to his well documented leg troubles, had also been playing through back pain for three or four months without telling anyone. The tumour was apparently pressing on some nerves, causing weakness in his legs and contributing to the difficulty he's had running all season. Doctors expect Melky to make a full recovery and be ready for spring training.

Obviously this is fantastic news for Melky. While it was benign, tumours are always serious business so I'm sure this has been a scary ordeal for him. Additionally, this could be fantastic news for the Blue Jays organization as they head into the off-season with numerous holes in need of filling.