Has The Time Come For Casey Janssen To Go? 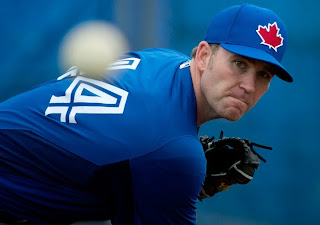 Dirk Hayhurst wrote a piece over at Sportsnet about his belief that the Blue Jays should trade Casey Janssen. Some of the reaction to this has been pretty vitriolic, and that's really not surprising given the prestige that the closer role holds, not just among fans but in baseball media and management circles as well. The thing is, Dirk is right. Hayhurst may overstate the case for trading Janssen a little, at least while there are still a few weeks left before the non-waiver trade deadline, but he's correct in arguing that Janssen could net them a very nice return while still allowing them to deal from an area of strength. His case hinges on a few points, but you can pretty much boil them all down to one argument: saves are dumb.

I encourage you to read the entire article, as he makes an excellent case himself, but the takeaway quote on the historical impact of the save has got to be:

The save statistic wasn't officially introduced until 1969, so his point is that winning percentages in what are now considered save situations have been the same in the 44 years since the save was introduced as they were in the 25 years before it was even a thing. The biggest difference is, now that the save is a thing, "proven closers" are getting paid boatloads of money for racking them up when there is very little evidence showing they provide anywhere close to the value their salaries would suggest.

The first problem is that they just don't pitch enough to make a huge difference over the course of an entire season. Also, much like pitcher wins, saves have a lot to do with circumstances beyond the pitcher's actual control. They aren't nearly as much a product of ability as they are a product of opportunity. The fact of the matter is that recording a save just isn't that hard. Closers enter the game with a lead and the bases empty. Sure, some of those times will be with a one run lead facing the heart of a good team's order. On the other hand, some of those times will be with a three run lead and the bottom of the order up. No matter what the exact circumstances are, are either more challenging or more important to winning a ball game than, oh let's say coming into a game with the bases juiced in the eighth inning?


Also, closers are often run out there in save situations regardless of whether or not they represent the best statistical match up for the batters they will be facing. They are generally guys who have shown the ability to get both handed batters out, but few and far between are the managers that will dare play percentages in a save situation, even when it might make sense to do so. It would be seen as a betrayal of the mystical closer mojo, not to mention it could cost whoever is in the closer role a sizable payday if they aren't given every opportunity to rack up the saves.

None of this is to say that a strong bullpen isn't important or that relievers are all interchangeable, because it is and they aren't. But having a strong bullpen means that you have a number of strong relievers, and any strong reliever should be capable of success in a save situation because save situations simply aren't the most challenging ones a reliever can face in the course of a game. Earlier I said that saves aren't nearly as much a product of ability as they are a product of opportunity. Perhaps you think that the closer is usually the best reliever on the team, and if they prove not to be they will lose the job to whoever has proven to be the best reliever. Sometimes this is true, but a "proven closer" often has to pitch extremely poorly to lose the job due to all the prestige, and therefore money, that is attached to the role.

So if I said to you "I believe that the Blue Jays have a very strong bullpen and would be better off not naming a closer. Instead they should just let Gibbons manage the great arms they have based on the situations they face throughout the course of a game," you might think that sounds like an alright idea. If I said to you "I believe the Blue Jays should go with a closer by committee," you would probably tell me I'm a complete idiot. Essentially they're the same thing, but "closer by committee" is usually what teams with bad bullpens say when they don't really have anyone they can trust in the late innings. If anything, the Blue Jays are spoiled for choice as pretty much everyone in their bullpen has proven quite reliable. Teams with good bullpens don't say "closer by committee" because they always have someone they feel is worthy of hanging the closer role on, whether it's the best way to win games or not.

Brett Cecil is a new man this year. After working out with Steve Delabar's weighted ball program (more on Delabar in a minute) he has rediscovered the velocity that has eluded him in recent years, and then some. He's also made some changes in his pitch usage this year, and while he was pretty good in relief last year, he has been an absolute monster in 2013.

In addition to being one of the best stories in baseball (by the way, #RaiseTheBar!) Delabar has also been nearly untouchable in 2013. He throws in the mid to high 90s and throws a nasty splitter that gets a lot of funny looking hacks.

If you believe that a team's closer should be their best reliever, well you shouldn't have a problem with either of these options. Unless of course you believe in the whole "proven closer" thing, in which case I'd remind you that Janssen wasn't one until last year, and neither Cecil or Delabar will be unless they get the chance. Cecil was drafted as a closer which is easy to forget given his years spent trying to start.

Personally, I think the best argument against putting either in the role is that they're too good for it. They've both pitched more innings than Janssen and it's precisely because they haven't been closing. I'd rather they stay in the roles they've been so successful in, and if the team feels the need to have a go to closer I'd like to see Wagner, Santos when he comes back, or maybe even McGowan given the chance so that Cecil and Delabar are available for high leverage situations earlier in the game.

Janssen has a $4 million option for next year which makes him more valuable in a trade, but if he has another year like these last two he's going to get closer money in free agency. "Closer money" is just another way of saying too much money, and with so many internal options with more years of team control to replace him the Jays would be out of their minds to give him market value. That option makes him more valuable in a trade, contending teams are always looking for reliable bullpen help at the deadline, and there's almost always someone willing to pay too much for it. Hayhurst proposes the Tigers, Cardinals and Diamondbacks as potential trade partners, but there are almost certainly others. The Dodgers strike me as yet another possibility as they're right behind the Diamondbacks and seem to have a tendency to overvalue relievers. The Red Sox also need bullpen help, but nuts to them. Others have surely inquired.

At the end of the day, I'm not saying the Blue Jays should trade Janssen at all costs, but his performance and contract make him a likely candidate to fetch a solid return. You have to give up quality to get quality. It's not a video game where you can trade 5 fringe players for a good one. If the Jays could somehow upgrade at second base or catcher it would all but certainly outweigh the marginal loss to their bullpen Janssen would represent. I'd hate to see him go as I've been a fan for years, but the Blue Jays are in the business of winning ballgames and trading Casey Janssen just might be a casualty of doing so.