Twitter-Inspired Thoughts on the Tigers/Rangers Trade, Alex Anthopoulos, and Pandering to the Lowest Common Denominator 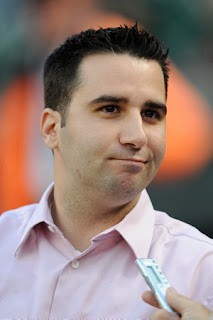 Obviously the big news in baseball this week is the blockbuster trade between the Texas Rangers and Detroit Tigers. With the notable names involved, the enormous sums of money moving around, and the near-immediacy with which it went from rumor to reality, it should be absolutely no surprise that the Twitterverse was abuzz with opinions from experts and amateurs alike on who had "won" the trade, because obviously somebody had to. In today's social media driven climate of armchair analysis there must always be a winner and a loser. If the trade was good for one team it must have been bad for the other. Shades of grey cannot exist in an environment that demands something be either black or white.

That's not my intent here though. I think that trade was perfectly acceptable for both teams. I like it for the Tigers a little bit more, not so much because of the players involved, but because of the domino effect it has on the rest of their infield and the cash it frees up for them to either re-sign core players like Max Scherzer and/or go out and upgrade in other areas through free agency or by taking on more salary in trades. The Rangers needed some offense though, and in that stadium Prince Fielder should provide it in spades. It allowed them to clear a spot in their middle infield for the much cheaper Jurickson Profar to play every day. They even got the Tigers to send $30 million their way to make paying Fielder for the next several seasons a little bit more palatable.

Both teams traded something they had a surplus of (in Texas' case middle infielders, in Detroit's slugging 1B/DH types) for something they needed more of. A lot of salary moved around, but neither of those teams are short on cash or afraid to spend it. It's not my money, and neither of the contracts is likely to cripple the finances of either team, so whatever.

What caught my eye in the midst of the maelstrom of opinion, however, was this little nugget from Toronto Star baseball columnist Richard Griffin:

It worries me that #bluejays GM Alex Anthopoulos suggested it would be a late-developing off-season market. #rushtojudgment
— Richard Griffin (@RGriffinStar) November 21, 2013

I mean... why go there? I congratulated Griff on a well-executed troll job, and we had a little (civilized) back and forth in which, at his request, I defined "trolling" for him like so:

@RGriffinStar Making negative statements that appeal to the lowest common denominator so as to provoke an angry response.
— Blue Jays Blackboard (@BJaysBlackboard) November 21, 2013


Your definition may differ from mine, and he assured me that wasn't his intent (and I'm inclined to believe him, as I generally respect his work), but still... why go there? Whether you're seeking affirmation from slow-witted Blue Jays fans who can't distinguish between process and results or picking an argument with those who can, who is really served by this sort of passive aggressive mud slinging?

If you accept Richard Griffin as an expert on Blue Jays baseball, as many of his readers and followers surely do, is the logical conclusion of this little jab not that Anthopoulos is out of touch with this year's off-season market, with it following that perhaps he's not really cut out for the job of general manager at all? I mean, perhaps I'm reading a bit too deeply into it, as I've been noticing more and more of an anti-Anthopoulos bent to Griff's writing over the course of the disappointing 2013 season, but come on...

It's fine to critique the moves a general manager makes, up to a certain point. Obviously there are no sure things when trading or signing players. GMs don't have the benefit of a crystal ball, and every single move they make has at least some chance of going catastrophically wrong. They operate daily in the realm of uncertainty and risk, and as long as the guy in charge of your favourite team seems more often than not to be navigating that reality with a semblance of rational thought and a coherent plan you're doing alright, even if things go bad. I feel like we could do a lot worse (and have, I might add) than Anthopoulos.

The 2013 Blue Jays are a classic example of sound process gone horribly wrong. By spring training last season, almost everyone around baseball considered the Jays a favourite to make the playoffs, if not win the World Series. Almost all writers and the front office types they asked considered the Blue Jays one of the teams to beat, implying if not outright stating that they'd have made many of the same deals given the opportunity. Fans bought into the vision too, with their hopes, dreams and wallets.

So to now act, with the full benefit of 20/20 hindsight, as though Anthopoulos should have known all along that almost every single move he made that off-season would be an unmitigated disaster is beyond unfair, and those disasters should not blemish what has been a pretty decent track record as GM of the Blue Jays thus far.

Sure, there were questionable elements to it. A third year for Izturis seemed a bit much, but there was every reason the think he could be an average-ish second baseman for at least a couple of those. Having to ship both Travis d'Arnaud and Noah Syndergaard to the Mets for R.A. Dickey was a steep price to pay, but he had just won the Cy Young following two other very good seasons, so even with some expected regression he probably should have been more than just the innings eater the Jays got in 2013. A case could be made that he was in the second half when it was too late to make a difference. Melky Cabrera was a risky bargain pickup after a PED tainted 2012. Nobody expected him to contend for another batting title, but I'm also pretty sure nobody expected him to be almost unplayable on both sides of the ball. But hey, spinal tumours will do that I guess.

In addition to Izturis' absolutely horrendous year, the Dickey disappointment, and Cabrera's freak medical condition, there were also the lengthy injuries to Reyes and Lawrie which ensured that the 2013 Blue Jays' projected starting lineup didn't all take the field together until the All-Star break. That's before you even consider the injury and underperformance-plagued seasons of Brandon Morrow, Josh Johnson, and even J.A. Happ, and those are just the problems that struck when it was still early enough in the season to matter.

There's not a general manager in the league that could have solved all of those issues mid-season, and trying to in a fit of panic could just as easily have made the team much worse in the short and long term. Any trades he might have made to in an attempt to shore up the 2013 team would have certainly meant further depleting the farm of its close-to-the-majors talent, and probably wouldn't have been enough to change last season's outcome enough to be worth it anyways.

That's why I have such a problem with the kind of knee-jerk AA bashing that Griff displayed in this particular tweet. All it does is suggest that there should be some sort of blame attached to Anthopoulos for not knowing that a blockbuster trade like the Fielder/Kinsler swap was about to happen, and that's just ridiculous. For all we know, he was perfectly aware that there were talks going on, but breaking trade rumours about two other teams isn't his job, and certainly wouldn't jibe with his tight-lipped modus operandi. Maybe the talks hadn't even begun when Anthopoulos made his statements to the media about it being a slow-developing market. Even if he didn't know about it, guess who else was similarly out of the loop? All the baseball writers whose job it actually is to break that sort of news, and who didn't make a peep about the possibility until minutes before the deal was finalized.

A general manager's job is hard enough without the media fueling this sort of irrational negativity. The hotter a GM's seat gets, the more likely they are to begin making moves out of desperation and start risking the team's future success in a short-sighted attempt to save their own job in the present. There are already enough fans, justified or not, foaming at the mouth for things that Anthopoulos actually had anything to do with. It really grinds my gears to see the mainstream media validating the insanity of blaming him for things he didn't.

There will be missteps along the way to building a contender, as there are for any team. Remember, the only reason the 2013 season was so disappointing is because their were expectations, and the only reason there were expectations is because everybody (including you, Anonymous Angry Fan!) thought that AA had gone out and built himself a winner. Most of those pieces that gave such hope are still in place, so let's not judge Anthopoulos on what went wrong last season, as so much of it was out of his hands. Instead, let's judge him on what he does about it this off-season.

The job hasn't gotten any easier with the team a year further into their competitive window, a core that is a year older, limited payroll flexibility, and a depleted farm system from which to deal. Keep in mind, Anthopoulos has only had one year of sitting at the grown-ups table with the high payroll teams, so let's see what he does in his second before we start throwing stones. I would hope our opinions as fans are very far down the list of considerations when it comes to Anthopoulos' future as general manager of the Toronto Blue Jays. All the same, let's not make his job any harder than it already is, because that's when bad decisions start getting made, and it's the fans, not an unemployed Anthopoulos, who will have to live the consequences for years to come.